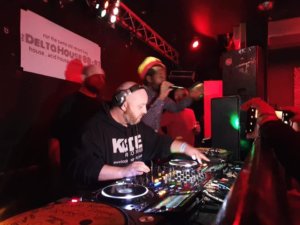 As someone that started out as a raver in 1990 Nixon has always had a musical background after following is has fathers footsteps,
Moving on the other other side of the decks in 1999 starting out being one of the innovators of internet radio way back in the early days of the internet working with such organisations as Di. fm and the Ministry of Sound.
Now moving in to the club scene Nixon has worked with many organisations to name a few such as Labrynth, Detached, Coaster, Witstock offering many genres of music coming from 1980 to the current days selections offering Funk & Soul, Oldskool, House(new & old), Garage, HCB, Jungle, Drum & Bass.

Rave Radio offers you live audio and video DJ 24hrs a day 7 days a week, you will find everything from early acid house and hip hop right up to current day nu-skool - We also have a friendly chat room and forum and welcome all new members young and old so pop in chat and say hello.
Discover more

Any cookies that may not be particularly necessary for the website to function and is used specifically to collect user personal data via analytics, ads, other embedded contents are termed as non-necessary cookies. It is mandatory to procure user consent prior to running these cookies on your website.